Back in the 90’s, the media would often refer to Selena as the “Mexican Madonna.”  I always figured they meant that because of her stage clothes and costumes.  But that statement was a bit off target as she was never over the top or raunchy.

However another interpretation I’ve heard is that it’s the fact she constantly reinvented herself and her music.

Or perhaps they think of her gracing the stage of the Houston Astrodome in her infamous purple jumpsuit.

Selena went through many phases in her fashion and with her music . She kept up with the trends but also added a little personal flair to make it her own.

There’s eras in her career that some people may not know about. They each had their own unique place. Today I’m going to have a quick look back at the various stages of her looks and fashion.

Selena started her career around 1982.  Her fashion was a bit…clunky. But she was still just a kid. And well, sequins were in and the 1980’s were not kind to anyone. But she could pull off that tiny mullet 😉

Musically, the Dinos mostly did cover songs. Everything from Anne Murray’s “You Needed Me”  , Rick James’  Super Freak  and a lot of the original Dinos songs from when her father was in the group back in the 1960’s . They didn’t quite have a distinctive sound yet. But you could still hear the raw emotion in her voice, especially on the ballads.

This clip is one of her first television performances. She was around 11 years old. 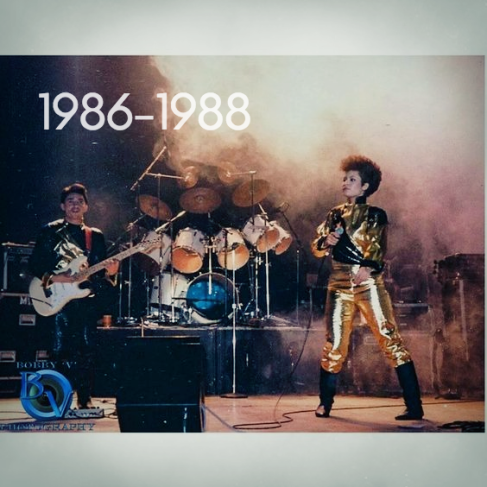 Selena was rockin the perm and lots of eyeliner like most teens in the 80s. She kept it modest yet flashy. She was already creating her own outfits by this point and her young budding fashion sense was beginning to show. I always thought she looked older at 16 then she did at 23.

Her first album “Alpha” was also released which gave her a huge boost in her career. This is when she really started to bloom. Her brother AB was now writing for the band and they had some of their own music now. She won her first Tejano Music Award and continued that streak until her passing.

Most of her music was traditional sounding Tejano music so lots of keyboards and accordions. Some of my all time favorite songs came from this period – “Corozoncito” and “Terco Corazón”.

Although she wasn’t dancing all over the stage yet, she was already comfortable performing live by 15.

This era is her most under appreciated and my absolute favorite. Her voice had matured significantly in the past couple of years- at least compared to her first album. While she was making her name in Tejano music, she also did her share of English pop music at her shows. Her dance moves were influenced by Janet Jackson, Paula Abdul and Madonna. And if you caught them at the right gig, she would even have a few backup dancers. She could of totally pulled off a mall tour with Debbie Gibson and Tiffany. (all you younger folks, google them 😉 )

From permed dyed brown hair to a dramatic short cut , she experimented with various looks during this period. I have always adored her bobbed hairstyle. It gave her just a little extra sass.

Selena also introduced the bustier around 1990 and became a staple in her attire.

I wish her cover songs received more recognition.If you ever want to see Selena tear up that stage, have a watch of her singing “Only in my Dreams”, or  “Billie Jean” or “No More Lies” .          .

But my current obsession is her version of Michael Jackson’s  “Don’t Stop til You Get Enough.” It’s not easy to pull off MJ but her voice was made for this song…

At this point in her career, Selena and her band were more focused on cumbias and Tejano music than Top 40 cover songs.  Before she was doing more of hip hop inspired dance moves and now she was dancing more in a traditional style. Sure she would break out her moves now and again with songs like “Enamorada De Ti” but mostly she was jamming out to songs like “Como La Flor” and “La Carcacha” with Pete.

She went from entire outfits to matching blinged-out bustiers and pants. Not every time but it did become a bit more of her signature look.  She mentioned she liked to wear the high waisted black pants as they were slimming and flattering on her hips.

In my mind, this was her most memorable look. If you ever see a sparkly bustier and a newsboy style cap, you’re going to associate that with Selena.

This is classic Selena: 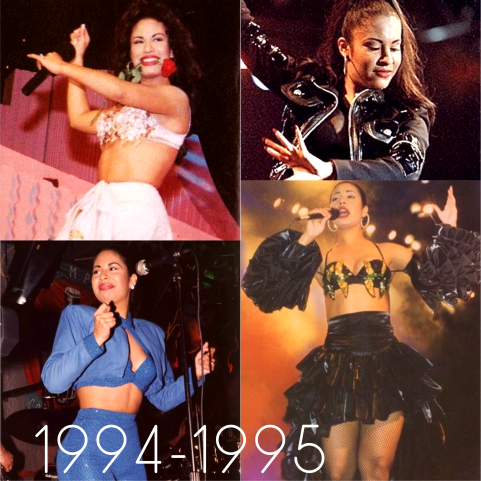 The bustiers were starting to phase out late 1994. Selena began to wear more of jumpsuits and elaborate costumes. She started to use brighter colors and take a few more risks in her outfits. She was already starting her own clothing line and perfume- something that wasn’t really popular among celebrities at that time.  Her boutiques were starting to take off because people were wanting a piece of her flamboyant style.

Selena’s music was in the midst of transitioning from Tejano to more of a Latin sound. Her band now had a percussion section and she welcomed on Freddie and Don to sing backup in Los Dinos. She still kept a bit of the Tejano roots with songs like “Corbade” and “Tus Desprecios” but “Amor Prohibido” and” El Chico Del Apartmento 512″  were showing signs she was heading towards Latin pop now.  She was more than ready for that English crossover album.

As we all know, we only got to hear a small amount of her next big move.

Of course we can only imagine where she would be today. I envision she would of been a huge trendsetter when it comes to fashion, even more so than she is today.

Musically, it’s hard to say. With that voice, she could of done any genre. She was so versatile. Maybe a country album?

Even though her time with us was short, she accomplished so much and has no doubt made a mark in pop culture and it continues to grow every year. To sum up her contributions, I’ll quote Selena herself-

“The goal isn’t to live forever but to create something that will.”

And she did just that.